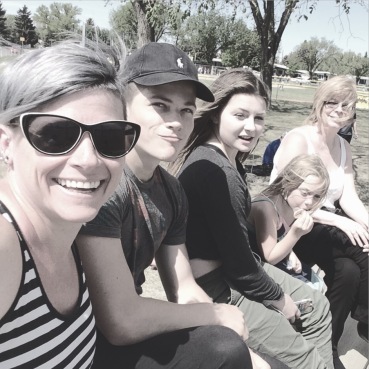 We are a busy family. With eight people in the house, I think it’s nearly impossible to not be busy. Even without registered activities, we stay fairly active. But to be completely honest, the registered activities are taking over our lives. We have brownies on Mondays, roller derby on Tuesdays, soccer on Mondays/Wednesdays/some weekends, in the fall we have football nearly every day, and in the spring we have baseball two nights a week. I coach roller derby and have volunteered to coach baseball this upcoming season. 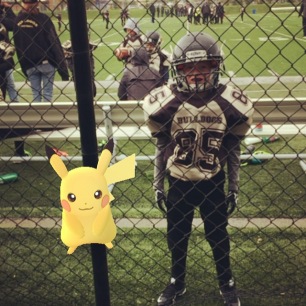 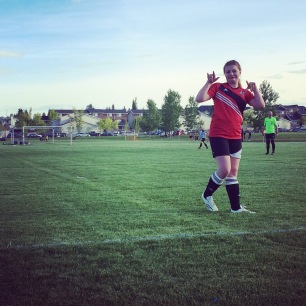 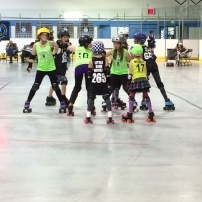 Last week my ex gave me crap because our son’s baseball tryouts fall on his weekend, and his football games in the fall were on weekends. The thing is, I completely understand his frustration and would be fine without all the scheduled activities. But, here’s the kicker: that same ex took me to court for custody last September, and listed the “lack of activities” on his affidavit as one of the reasons. He actually took me to court and told his lawyer, who told the judge, that I “simply did not have the time” for organized sport and he saw that as a detriment to their upbringing (in actuality, I had the kids registered in activities, but we also took breaks). So now I am stuck between a rock and a hard place, I’m damned if I do AND damned if I don’t.

These things are good for them, I get that! But when does it become more of a hindrance than a bonus? How do we find balance?!

I want my kids to be able to just run to the lake and play a game of shinny with their friends, play basketball at the local school, or play street hockey in someone’s cul-de-sac, but the reality is… it doesn’t happen. This lifestyle of organized sport has taken priority over the spontaneous sport and activity, and I don’t know how to change it. This morning Ashton and I went to play football in the snow with another family, and it was fantastic! We need more spontaneity when it comes to play and sport, and all the organized activities makes it nearly impossible. And what makes it even harder is trying to co-parent with someone whose values don’t align with mine. I’m constantly trying to keep him happy as to not end up in court again, but also try to salvage some sanity and happiness in the process.

But we will prevail.

I will hopefully find my sanity in the summer.

Ashton is playing football this season, for the second year in a row. His team name in Lethbridge last year was the Bulldogs, and this year it is also the Bulldogs. He loves it. He loves it more than I ever thought he would. Dakota is also playing football, and Ashton loves doing the same things as Dakota, so this works out quite well. Dakota is currently playing on the senior team for his high school, and although he was initially told that he may not see any field time (being one of the younger players), he has played every game. I am incredibly proud of both of my boys. Being committed to a team, and showing up when you’re needed, is something we value around here. 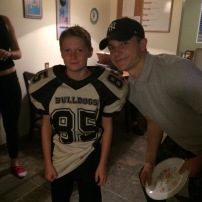 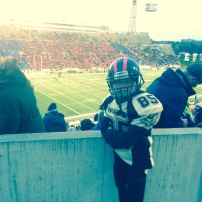 So this weekend, Ashton got the opportunity to play during the halftime of a Calgary Stampeders game. In order to play, the league had to win a ticket selling competition. 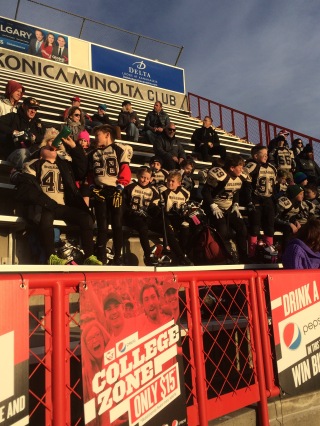 We had to sell tickets to the game, where a portion would be donated back to the league and then the winning two leagues would duke it out at McMahon Stadium in front
of 30,000 crazy fans. So we sold tickets. Ashton’s teacher bought tickets, along with his friends’ families, myself, Dakota and his girlfriend Bri, and a handful of other supporters.

We won the competition, and Ashton got to play at halftime. Holy hell was that kid excited! I have never had an opportunity quite like that, but I can imagine the adrenaline and excitement for all the Bulldogs as they ran on to that giant field. The music, the lights, the big screen, and the screaming fans… how amazing. They played there little hearts out for about ten minutes, and exited the field with smiles so big the entire stadium could see them. Afterwards, all the little Atom players ran to their families in the stands and were greeted with hugs and so much love. So many proud parents, friends, and family members were sitting in those stands. I hope Ashton remembers this day, and looks back remembering how proud he felt in the moment, and how loved he is by so many people. That kid is loved. 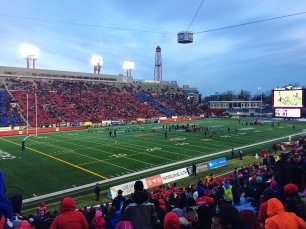 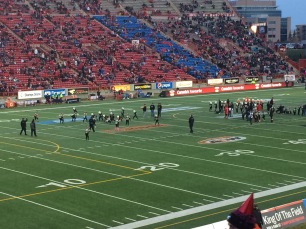 I don’t know how to tell you all this, but this kid… he’s kinda a big deal (even if he looks like a tiny little ant in these pictures).

I have anxiety, but more specifically social anxiety. As an early adult, I can remember getting ready to go out for the night with some friends of mine, and just feeling sick. I couldn’t eat or drink, I’d get super clammy hands, and have an awful tummy ache. I didn’t recognize that it was anxiety though until several years later when someone suggested it to me. Now I know why I feel the way I do when I need to engage in social behaviours like interacting with other school moms, or going to parties or events where we’ll be meeting people. Now I understand a bit more about why I feel so anxious getting on planes… it’s not the fact that the plane could crash and we all may die… it’s the fact that I need to be in a small space with so many people I don’t know. What if I have to sit between two strangers and have a conversation?! Worst nightmare.

Based on my own experiences growing up and as a young adult, I have an easier time relating to my little ball of anxiety, Aisha. She has not been diagnosed with anxiety, but it is fairly obvious. We have an appointment with a paediatrician coming up soon to help her find more tools she can use to cope.

I put Aisha in Brownies this year, as she has been begging to go in it for years. She was sooooo excited! But here’s the thing… kids with social anxiety may really look forward to the activity, but all their little anxieties about meeting people, saying something silly, not knowing what to say, or coming across as shy… all come out. I took a picture of her right before her Brownie meeting started, and I have never seen a more accurate capture of her while feeling anxious. She is excited and happy in this picture…. but also terrified.

I’ve decided to join her unit as a leader, in part because they needed another leader to meet ratios, but also so I can be there to help her transition and feel supported. She is a gentle soul that is not always understood, and if I can help her be understood or even be the person to understand her, then I will.