Aisha’s class went to the Royal Tyrrell Museum in Drumheller recently, and I was able to volunteer again. It was nearly a two hour bus ride full of grade 3 students and a handful of chaperones. This time, Aisha opted to sit with a friend of hers and I sat beside this very chatty 8 year old. This kid was pretty smart actually, and carried a good conversation about movies (he loves “Hunt for the Wilderpeople”, win), music, food, and other pop culture type stuff. I liked this kid. About halfway through the ride he fell asleep and I decide to read my current book of choice, “The Virgin Suicides.”

Immediately I start coming up with a plan of what to say when the innocent 8 year old beside me wakes up and no doubt would ask what I was reading, and ‘oh hell no’ was I about to explain what a virgin is to someone else’s kid. So after about 20 minutes when he asked me what book I was reading, I confidently said, “The Teenage Suicides.” I was okay with explaining the morbid reality of suicide if needed, but I am awkward at the best of times when talking about sex, so I lied. Thankfully, he was well aware of what suicide was, so we didn’t elaborate. I did however ask him if he liked to read. He looked at me, shrugged a little, and sheepishly said “ya, kinda.” But then he carries on to say that he is currently reading the second book of Lord of the Rings! Kid, you have got to be kidding me. You don’t kinda like reading if you are an 8 year old on the second Lord of the Rings book… you love it! Or maybe you don’t know you love it. Anyways, colour me impressed.

We arrived at the museum around 10am and proceeded to follow a tour guide in to the valley to talk about rocks, hoodoos, dinosaurs, and all sorts of other interesting things. Halfway through this hike I began to thank my past self for dropping my teaching career plan. I went to UofL to obtain a Bachelor of Education degree and teach elementary, but then after I was a student teacher for a semester, I said “forget this noise”…. literally, the noise. Nearly two hours on a school bus, twenty minutes in to a hike, and my past decisions were confirmed. I love kids, but mostly just my kids and my dayhome babies. All the pointless questions, the jumping up and down, and the clear defiance over and over and over made me want to put in my headphones and slowly walk away. I didn’t though, Aisha was having a great time, and I do love seeing her full of energy and grinning ear to ear. So I trudged along… me and the kid who couldn’t stop jumping.

The museum itself was amazing to visit, and I would highly recommend it to anyone who can physically make it there. It’s in the middle of the badlands, which are actually pretty rad, but definitely would have been a bad time for anyone trying to cross them with horses and a buggy (which is how the badlands were named). So many bones in the museum to look at, we found ourself nearly running. 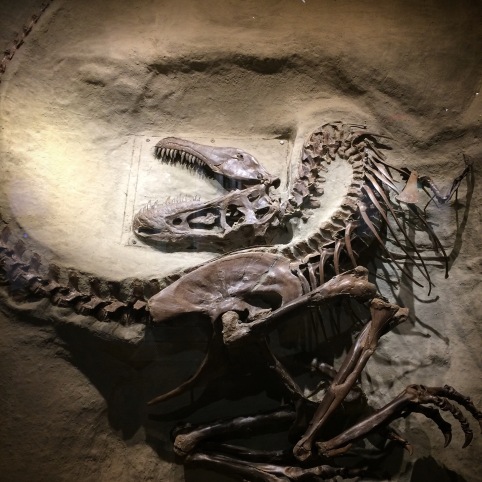 This dinosaur is in what they call the “death pose.” They’re not sure why, but this is how paleontologists typically find carnivorous dinosaurs. The neck is bent so far back, and I’m sure there are several theories as to why, but I’m not sure what they are. Kinda cool to see nonetheless.

Walking/running through the museum of bones was my favourite part, but the kids did partake in a couple workshops as well, which were pretty fun. They got to play a Trivial Pursuit type game with the theme being dinosaurs and the badlands. All the kids were pretty stoked to play this game, although after about 20 minutes some of them were squirming in their seats just dying to start jumping again.

The children also got to partake in a simulated dig and uncover some dinosaur fossils. The instructor taught them how to use the tools they were given, most of which were probably taken from a dental office, and off to work they went.

Overall, it was a great day. On the way home Aisha opted to sit with her friend again and I sat beside a new, not nearly as chatty, kid. I put my headphones in and sat silently for nearly two hours. It was a weird sort of heaven, where I was clearly surrounded by chaotic school bus hell, but managed to completely block it all and immerse myself in music, listening and reflecting on the lyrics of Rae Spoon’s “Bones in a Museum.”  Just in case you clicked on that link and thought, “oh god! That is so slow, sad, and depressing!” you need to know that Rae also has some fun and beatsome songs, so maybe listen to this, and this (mine and Lindsay’s song).

One thought on “Bones in a Museum”